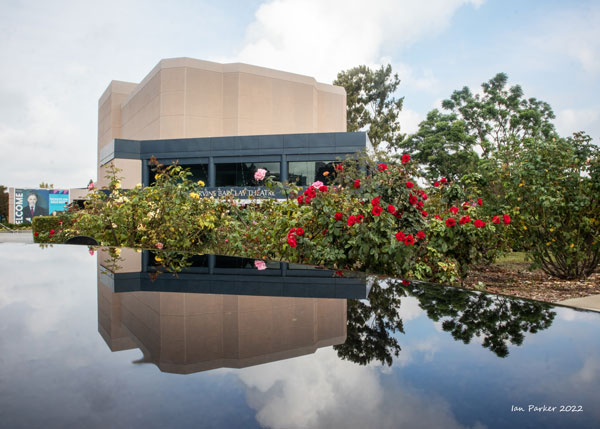 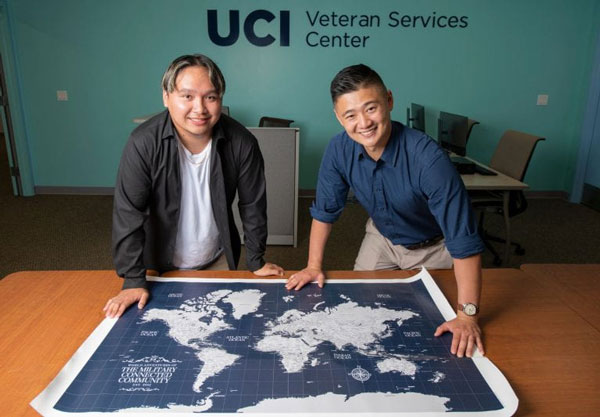 Anteaters Emmanuel “David” Sangalang Delacruz (left) and Raymond Lim of UCI’s Military Connected Community display the world map on which visitors to the campus’s Veteran Services Center are invited to pinpoint where they grew up and where they’ve been around the globe. Photo by Steve Zylius/UCI

The son of a U.S. Navy veteran, third-year philosophy student Emmanuel “David” Sangalang Delacruz recently founded the Military Connected Community at UCI to help military-affiliated Anteaters connect with each other. The group is assisted by Army veteran Dani Molina, who directs the Veteran Services Center, the only university locale authorized to process Veterans Affairs education benefits on behalf of military-connected students. Joining them is board secretary and graduate student Raymond Lim, who served as an Air Force emergency technician in Japan. A special Veterans Day ceremony will also take place on campus Thursday at 9 a.m. at the UCI Flagpoles outside Aldrich Hall. 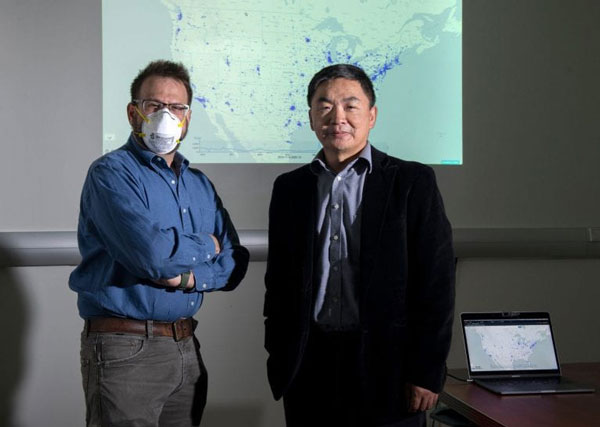 A UCI database of 2.3 billion U.S. Twitter posts is being analyzed by epidemiologist Andrew Noymer (left) and computer science professor Chen Li for patterns that might serve as an early warning system for future pandemics. Photo by Steve Zylius/UCI

Researchers at UCI and UCLA are studying millions of tweets (and other data) from the months leading up to COVID-19’s big splash, looking for anomalies and patterns that would have provided an early warning of the virus – and might similarly foreshadow future pandemics. The 10-member team received nearly $1 million from the National Science Foundation to carry out the work. At the heart of the study is a searchable database of 2.3 billion U.S. Twitter posts, but researchers are also analyzing news media stories, anonymous student health and absence statistics, biological data and a range of public information resources.

Up to 260,000 Californians could benefit from debt relief plan

The Biden-Harris Administration’s student debt relief plan, announced in August, would cancel up to $20,000 of federal student debt for Pell Grant recipients and up to $10,000 for other eligible borrowers. To qualify, students or parents need to fall within certain income limits and still owe money on a loan which is held by the Department of Education and that was borrowed prior to June 30, 2022. Although University of California undergraduates owe less than the national average (and half graduate with no debt at all), the plan could still provide significant relief to 260,000 people, including roughly 60,000 current students and 200,000 UC alumni, according to preliminary UC estimates. Of those, more than 40% would have their debt canceled altogether and roughly 33% would see their debt cut in half or more.

ICYMI: How to (retroactively) watch this a.m.’s total lunar eclipse

Most of Southern California was covered with clouds as badly needed rainstorms moved through the region last night and early this morning. Lack of visibility and the fact that the eclipse took place in the wee hours of the night means that most people failed to witness the phenomenon. Fortunately, you can see what you missed in all its blood-red glory on YouTube. 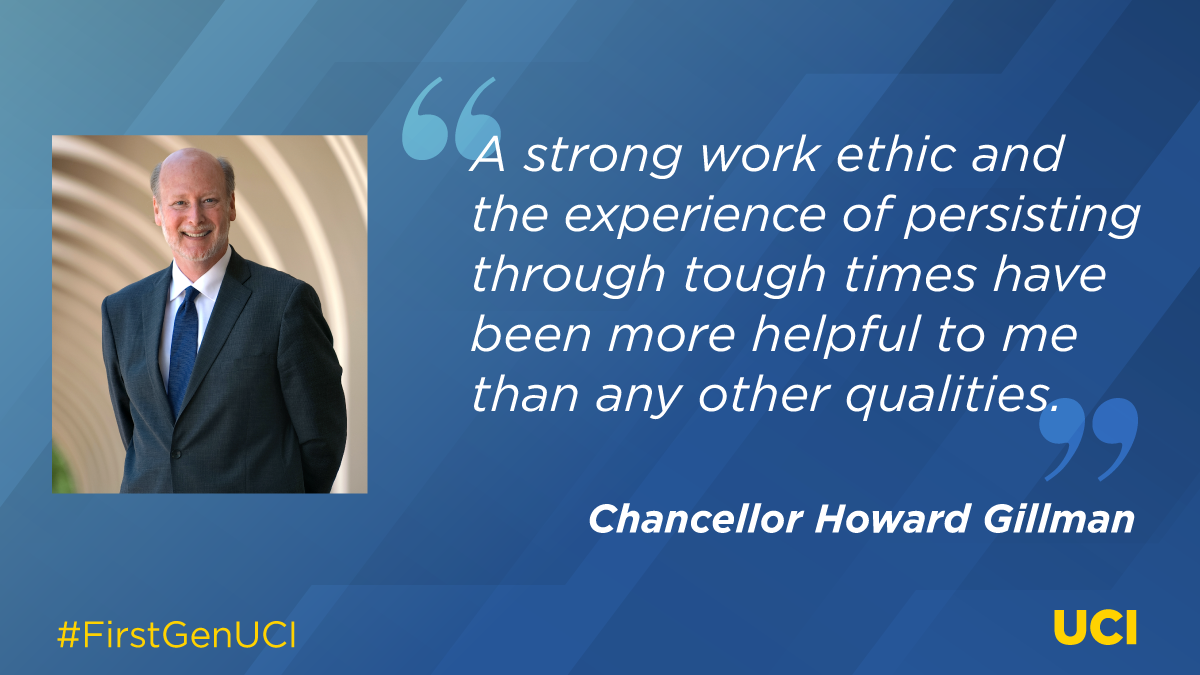 On this National First-Gen College Celebration day, Chancellor Howard Gillman shares how his background contributed to his success. (Scroll down to see his story.) Like more than half of UCI undergrads, Gillman was the first in his family to go to college.